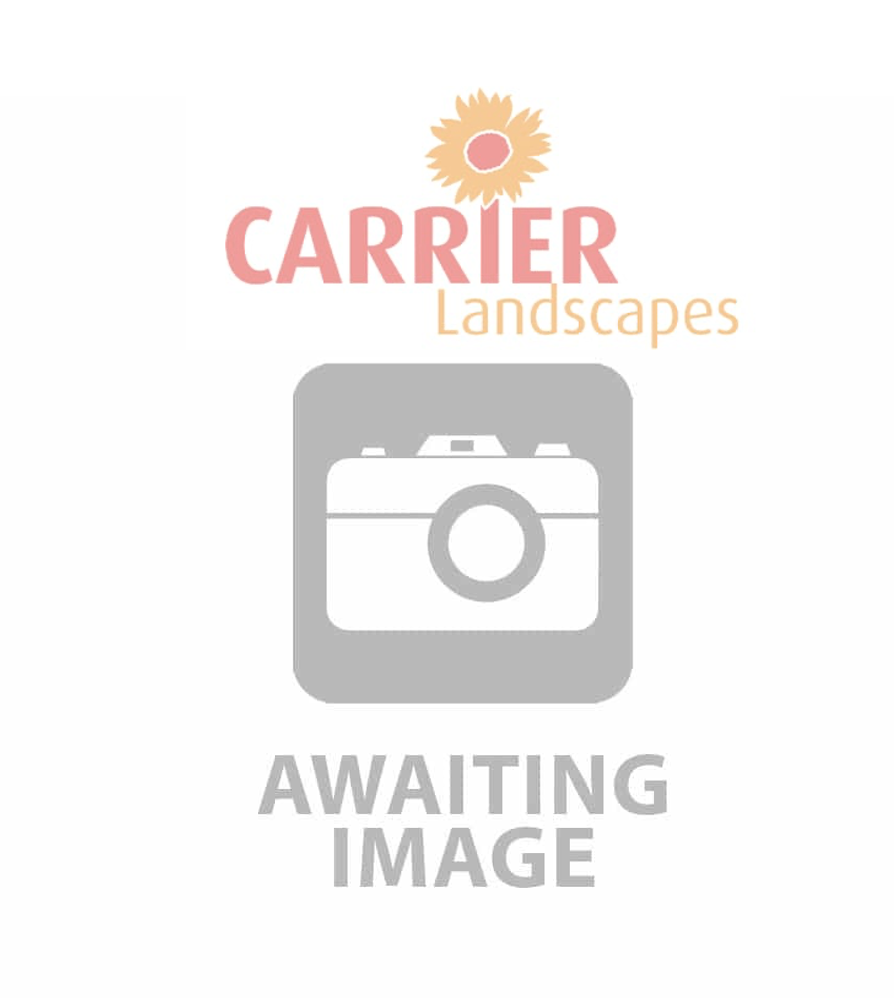 Duncan has been landscaping for over 40 years. He began as a teenager mowing lawns in his village. He attended Broomfield, Brooksby and Hadlow Colleges before starting Carrier Landscapes in 1989. He slowly built the business up from 2 men to its current size of over one hundred employees. The company has been built on quality, service and reputation. 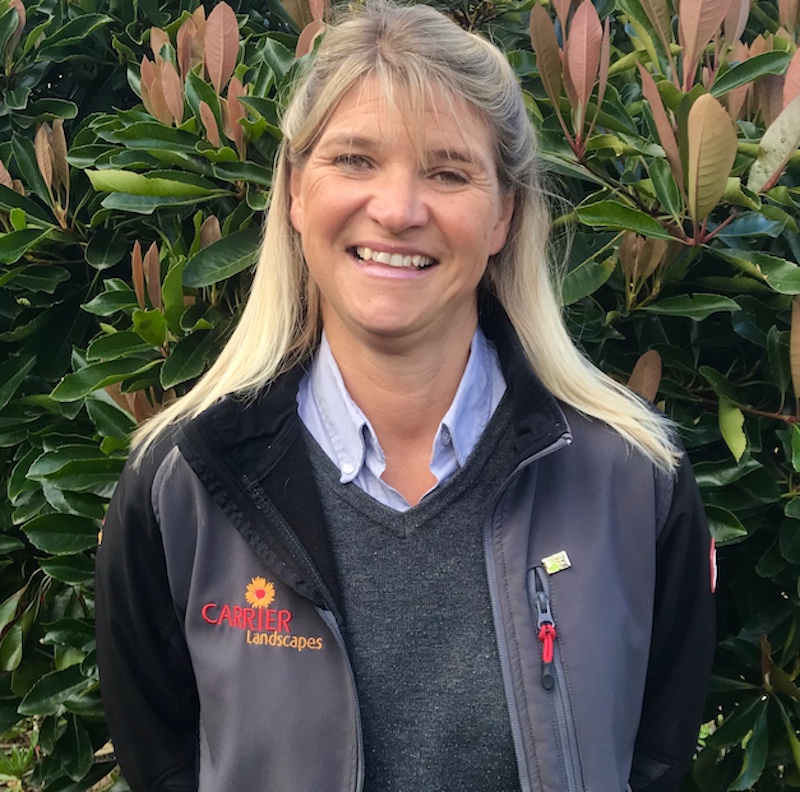 Julie worked in Sales and Personnel for one of the leading UK Supermarkets before joining Carrier Landscapes. She is responsible for HR Management and health & safety on all active sites. As a director she plays a leading role in overall decision making within the company. 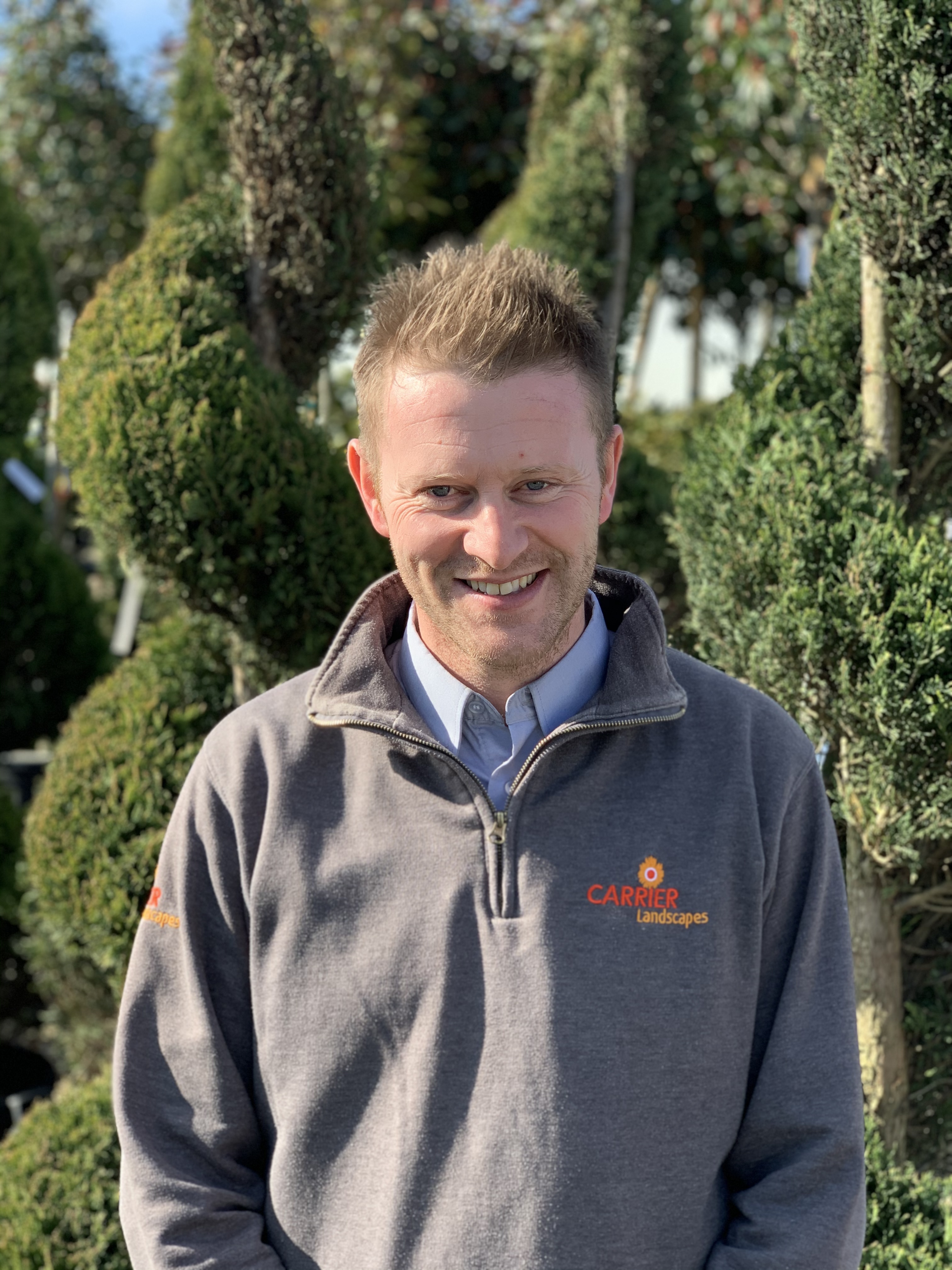 Mike started at Carrier Landscapes in 2009 as an operative and has progressed through the company. In the ten years he has been with Carrier Landscapes he has worked in a variety of roles such as: Team Leader, Estimator, and Assistant Manager. This means he understands the workings of the company well and has resulted in him progressing to his current role of Production Manager. 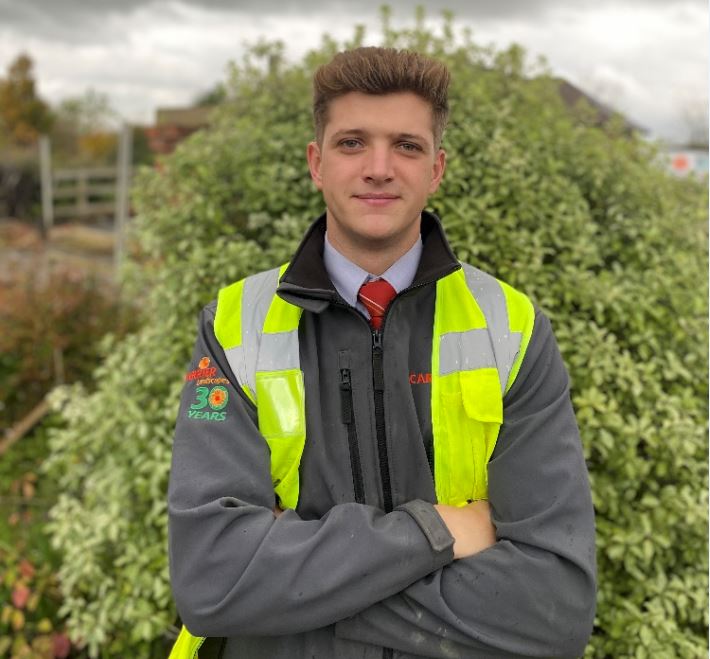 Wilf started at Carrier Landscapes in 2013 at the age of 15 working part time in the on-site mechanics workshop. From here he continued to work school holidays and weekends as a landscape operative. In 2017, Wilf began his time at University where in his first year he also gained a RHS level 2 in practical Horticulture. In 2018 Wilf spent his summer in the office learning the systems in place and how the company runs. In 2019 Wilf graduated from Pershore College (accredited by the University of Worcester) with a Bachelor of Science with honours in Horticulture from which he joined the company full time in his current role as the Production Manager. 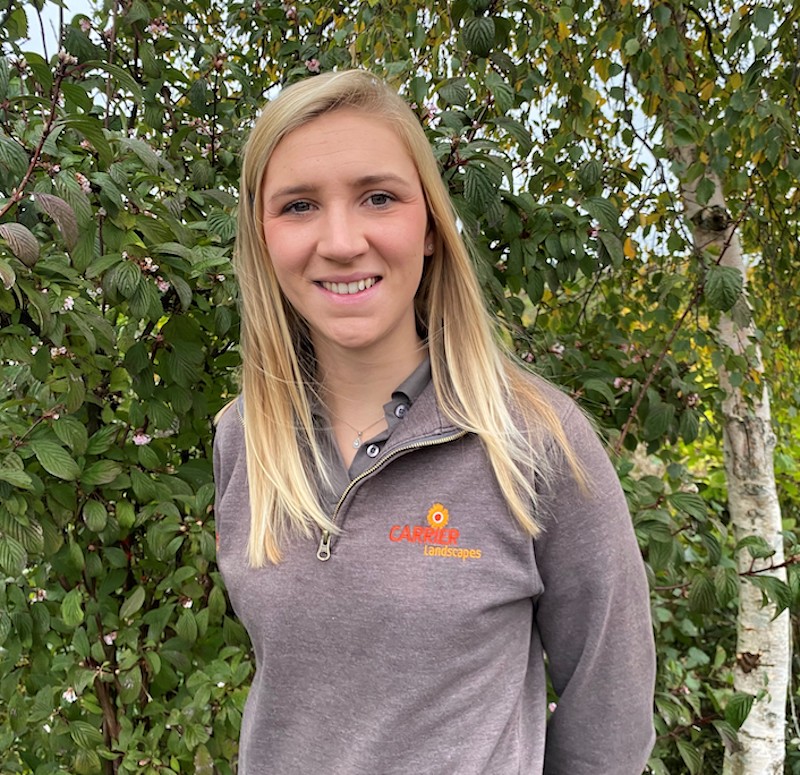 Eva has been involved in the family business from a very young age, where she also keeps a small holding, so can turn her hand to most jobs in the fields on machinery and the construction side of the new nursery which has been developing for the past 12 months. Eva graduated from Harper Adams University in 2019 with a degree in Business Management and Marketing. She then worked a placement year in the Sales Team at Barcham Trees Plc in Cambridgeshire, gaining valuable experience and horticultural knowledge. Eva has learnt all aspects of the company administration to be able to support each department. She is taking over the role of nursery manager and implementing the nursery as a company in its own right and is keen to develop its retail potential. 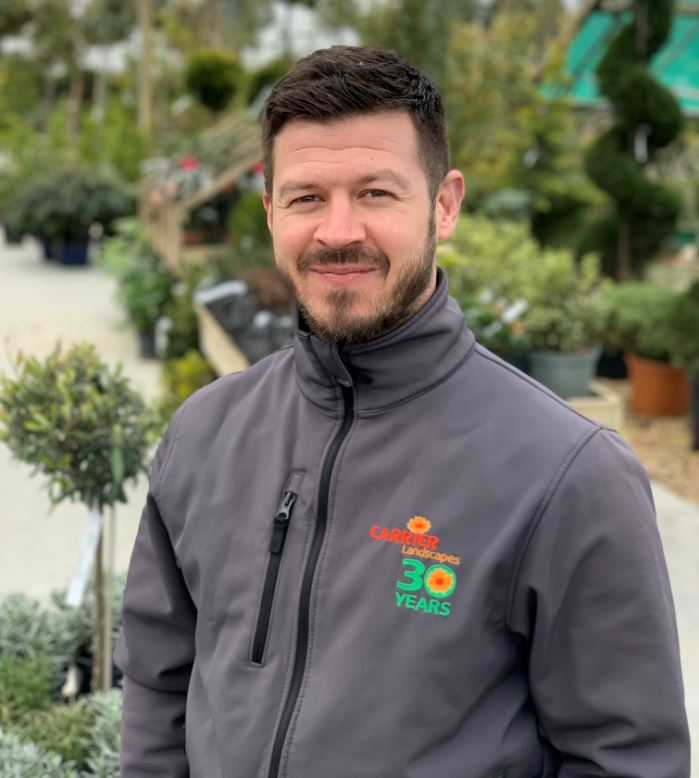 Simon has been with the Company since 2014, and had been promoted to Area Manager. During this time he has seen the area win multiple NHBC Pride in the Job Awards. Simon has recently completed a level 6 NVQ Diploma in Construction Contracting and Operations Management and has completed his SMSTS qualification (Site Management Safety Training Scheme). 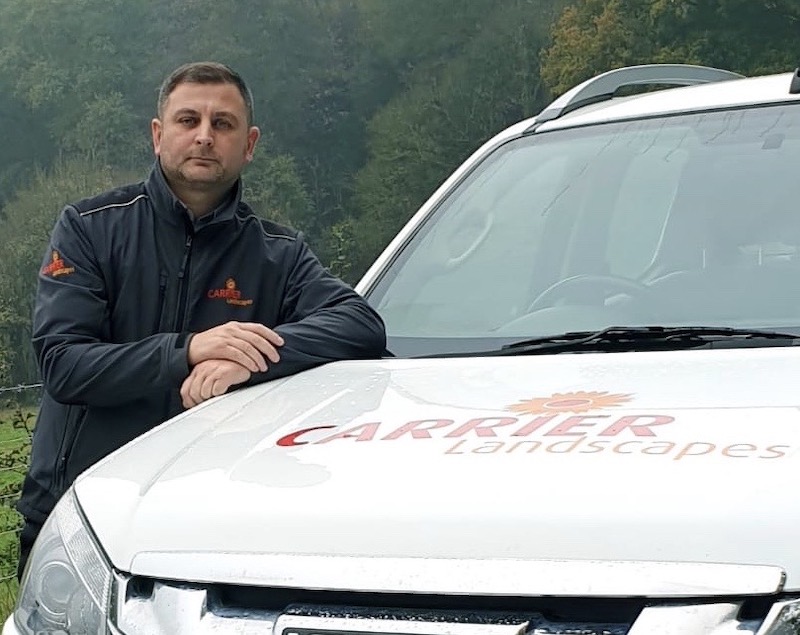 Simon has been with the Company since 2011 working as a Team Leader and Working Supervisor. Simon became Project Manager in 2016 and has produced some excellent results in the quality of the projects. Simon has an excellent hard landscaping background and has experience in playground installation. 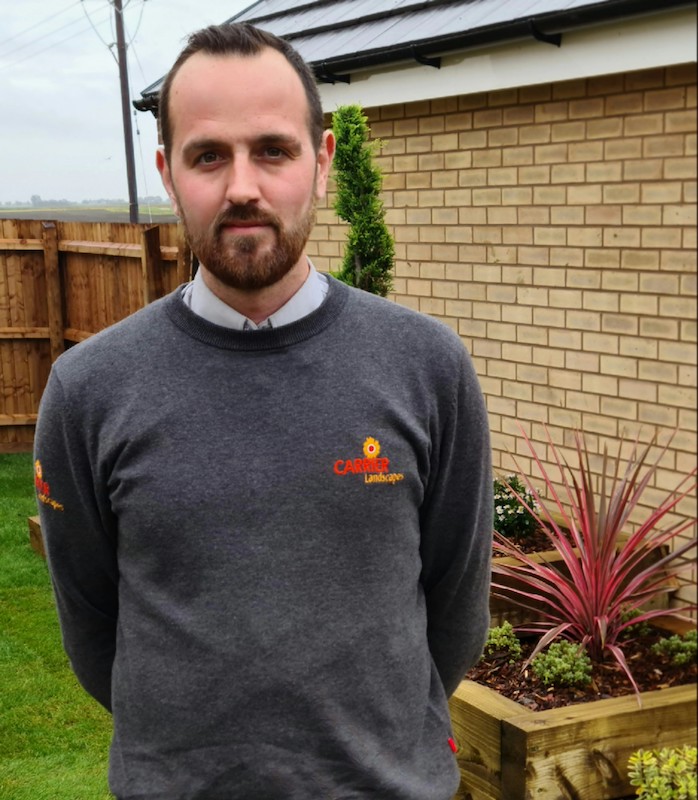 Joe joined the company in 2017 after being an installations manager for a national company in the construction trade. He started off as an operative, understanding the day to day running of Carrier’s, before quickly being promoted to a Team Leader. Now as Assistant Area Manager for the East, Joe has transferred his previous management experience to the role to help him hit the ground running and continue flourishing within the company. 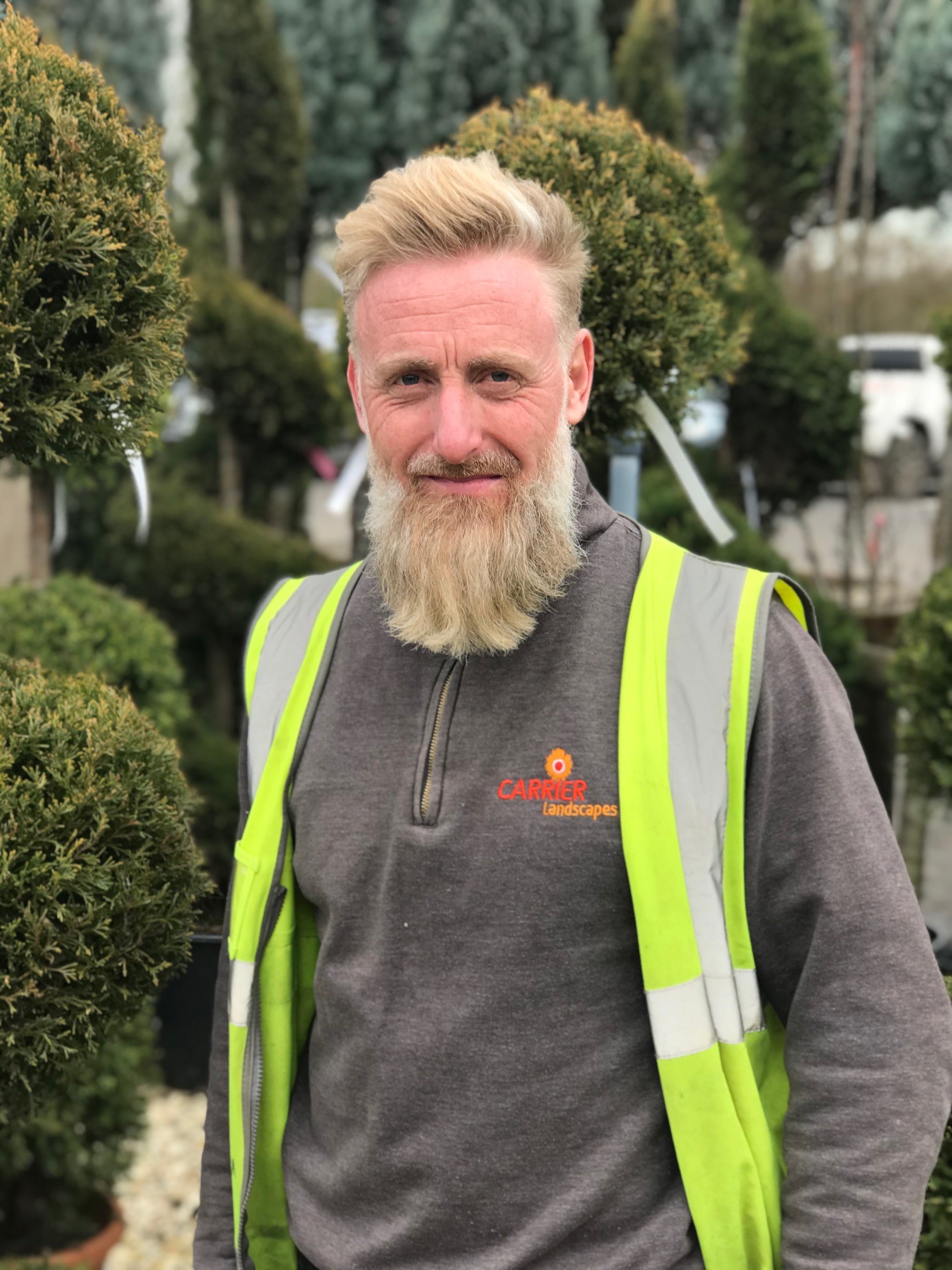 Stuart joined Carrier Landscapes Ltd. in 2013. Coming to us from one of the largest horticultural companies in the UK, Stuart has a vast plant knowledge which he uses in his role as Assistant Area Manager. He enjoys the wider experience and challenge of all aspects of landscaping. 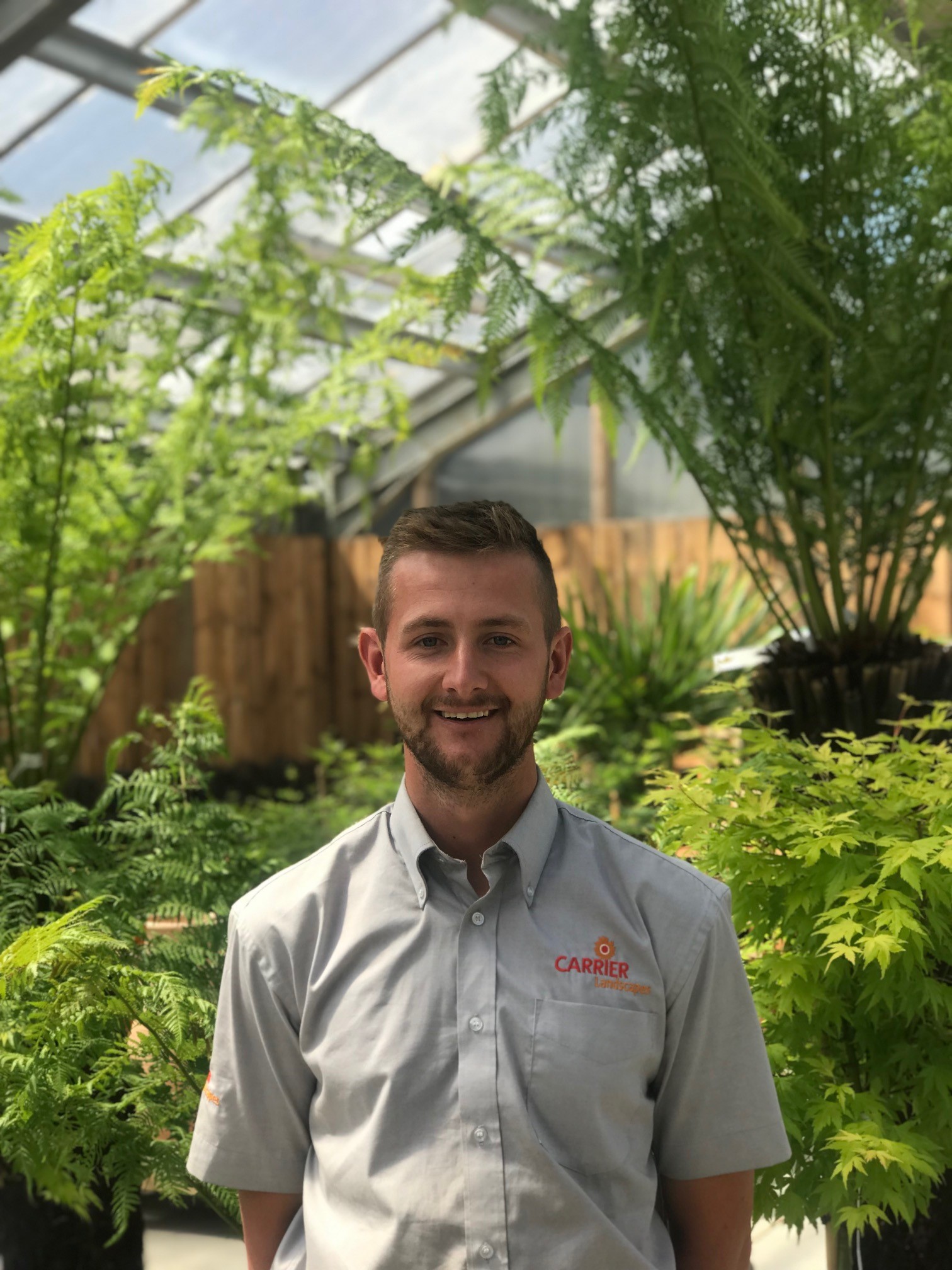 Joe joined Carrier Landscapes Ltd in 2018 as a Landscape Operative, as he was keen to join the Company and develop his career in Landscaping.   In 2019, he was promoted to a Team Leader, also gaining his SSSTS, NPORS Ticket and other useful qualifications within the industry. He previously worked as a plasterer and has a good eye for detail using this well in his current role as the new Assistant Manager, supporting both our North and West Areas. He actively supports the Estimating team taking on detailed tenders and quotations for clients. He is very enthusiastic, hardworking and an active team player, taking on the role in an office environment and his professionalism used out on sites. 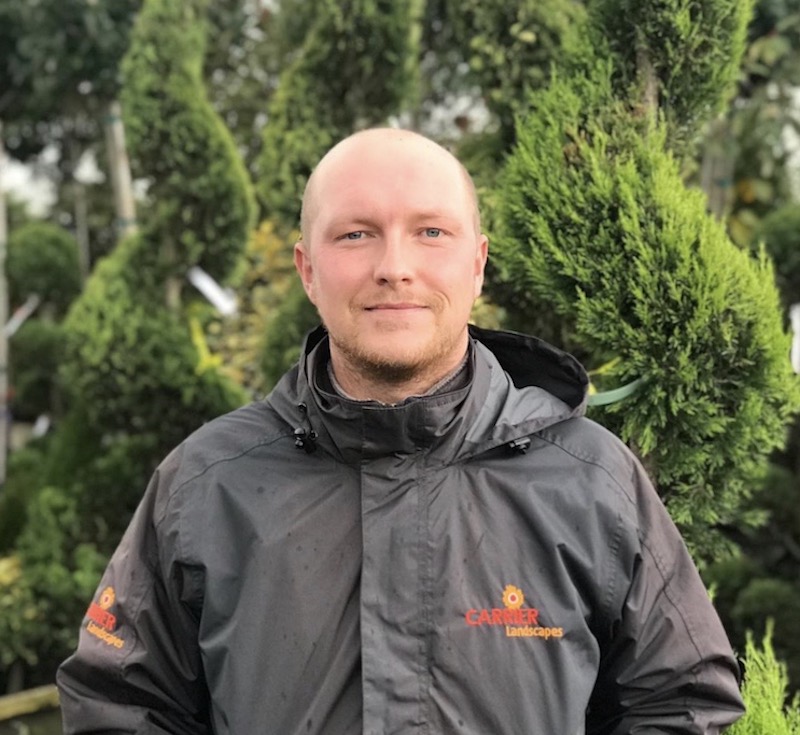 Jake joined the company in April 2015 as an operative and following a quick understanding of the Carrier brand and appreciation of the standard of quality expected he was soon promoted to a team leader in June 2016. He gained valuable experience in hard and soft landscaping and installation of play parks.  After a successful 2 years as team leader, Jake has now progressed to become an Area Manager and has brought to the role his calm and professional nature that is required when under pressure in the field. 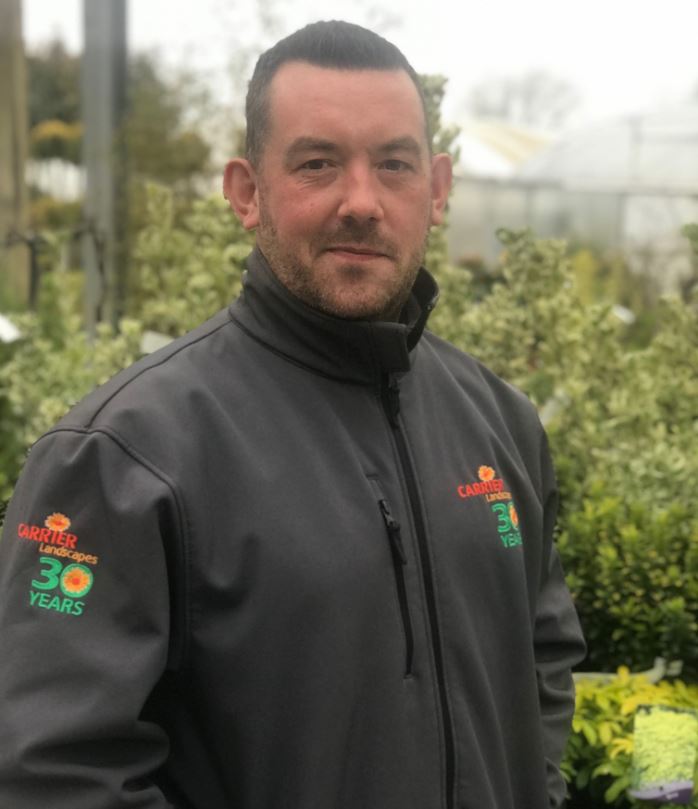 Simon Joined Carrier Landscapes in 2018 with an extensive background in cartography and design. After a few months at carriers he worked his way up to become a Team Leader in 2019 after gaining knowledge of soft landscaping and understanding the brand and work ethic of the company. Following promotion to Assistant Area Manager, he hopes to bring his experience of staff and project management into Carrier Landscapes. 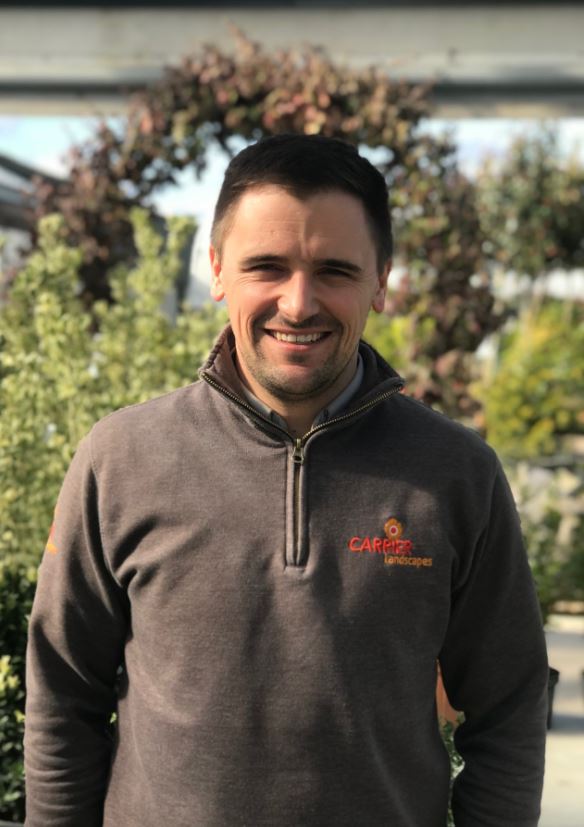 Ben started his career at Carrier Landscapes in 2016, joining the team as a Landscape Operative, proving a quick learning and understanding within the role, Ben was promoted to Team Leader. Continuing with his development and upskilling presented further opportunities to progress within the company lead to promotions as an Assistant Manager, and now Area Manager. Joining Carrier Landscapes from an experienced background in Retail Management using the transferrable skills helped him to push on with a career in Landscaping Management and gaining vast knowledge in the process. 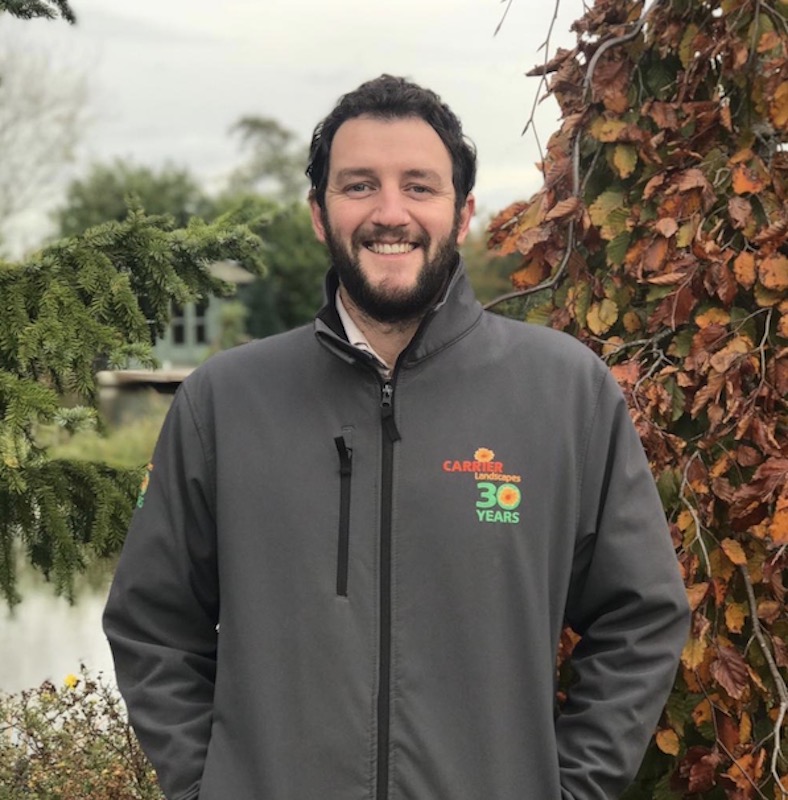 Chris joined the company as a Landscape Operative in 2012, working on all projects within the business, after moving from another landscaping company, where he had worked for a number of years. Chris soon progressed into a team leader role and then promoted to working supervisor a couple of years later where he covered our South region. It was during this role he was a part of the project team that won a BALI award. Chris has a great understanding of both the hard and soft landscaping industry with over 15 years of experience, and his recent step into the Management Team, as Assistant Area Manager, means he has experience and ethos required in the team.

Danny joined the Carrier Landscapes team in 2012, and has developed great experience in soft landscaping. Shortly after joining the company he was promoted to team leader, and since then Danny has progressed within the company and is now Area Manager in the North area. 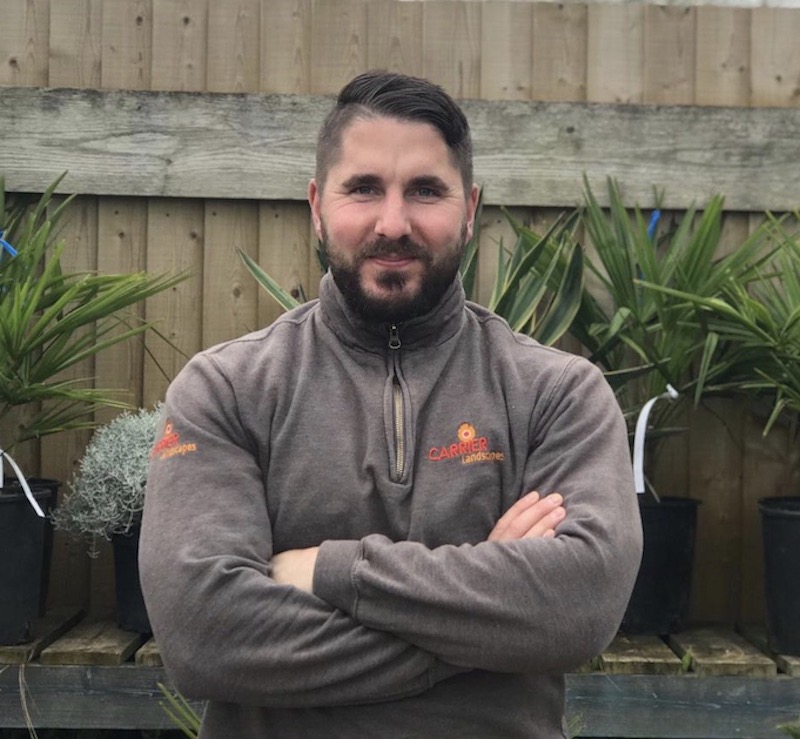 Alex joined the company in 2018, with experience in the building and landscaping trades. He is a qualified bricklayer, working for numerous UK leading housebuilders and has extensive knowledge of hard and soft landscaping. With his supervisory background for various blue chip companies it was apparent Alex quickly was capable of becoming an assistant manager which would be a good appointment for the business.

Chris started as Estimator for the company in Autumn 2018, having experience and knowledge in the arboriculture sector. Along with 14 year’s experience in customer service and service management within the automotive industry. Chris can bring transferable skills to the estimating team, focussed on providing the best service to our clients through quality delivered information at tendering stage. 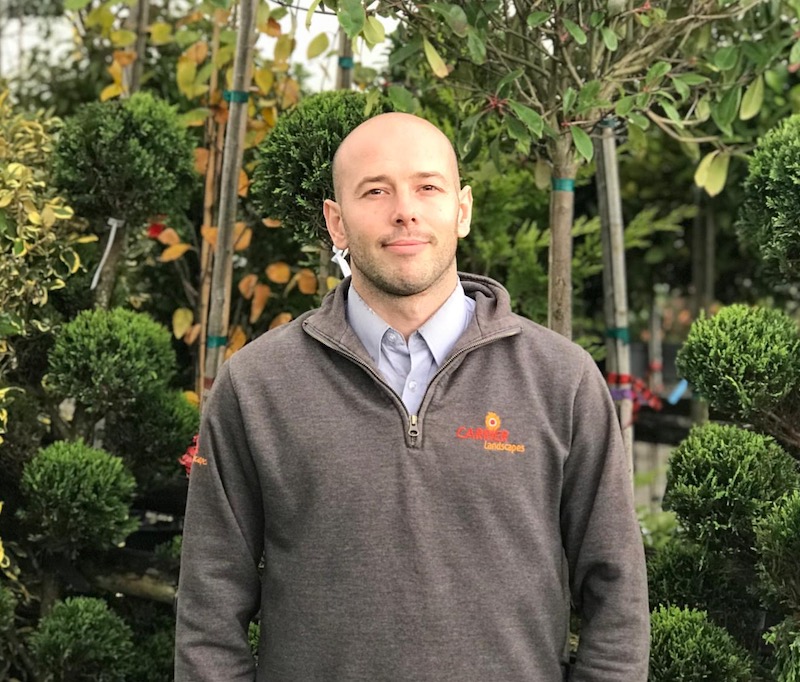 Tom joined the company in 2017 after being an accounts manager for a leading corporate brand spanning over 13 years. He brings expertise in Business Development and Performance management to Carrier Landscapes Ltd. He has qualifications and experience in arboriculture.  Tom is now the Development Manager for the company which involves enhancing staff skills through personal development, positive feedback, team motivation and dealing with HR elements for the company. 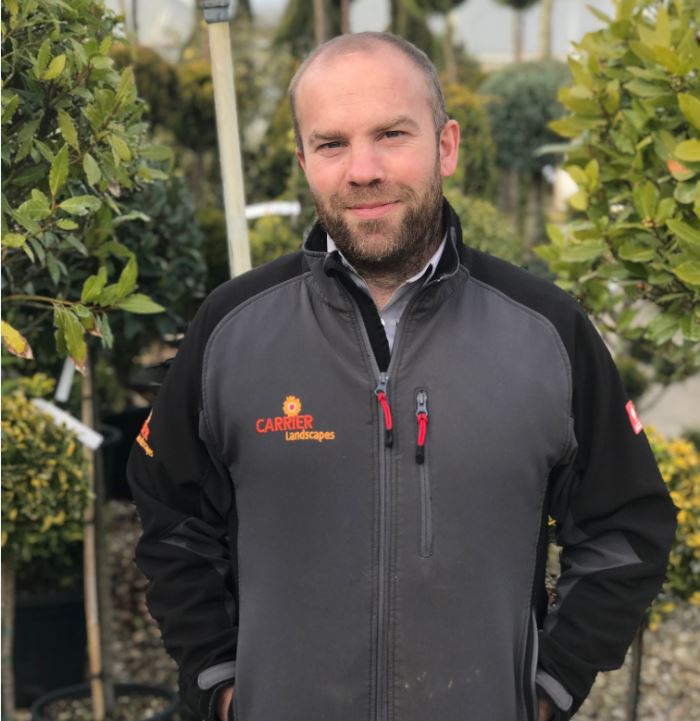 Richard joined Carrier Landscapes in 2009 as a Landscape operative. In  2010 he successfully promoted to became a team leader and fulfilled that role for 10 years completing hard and soft landscaping to a high standard. As one of our  most experienced landscapers, Richard was promoted to working supervisor in 2020 in a role he held for a year before being promoted to Assistant Area Manager in February 2021.  His extensive knowledge of Landscaping and how the company runs will be a real asset to the team.

Do you have a project that you would like to discuss?

Enter your details and we will get back to you to discuss your project.